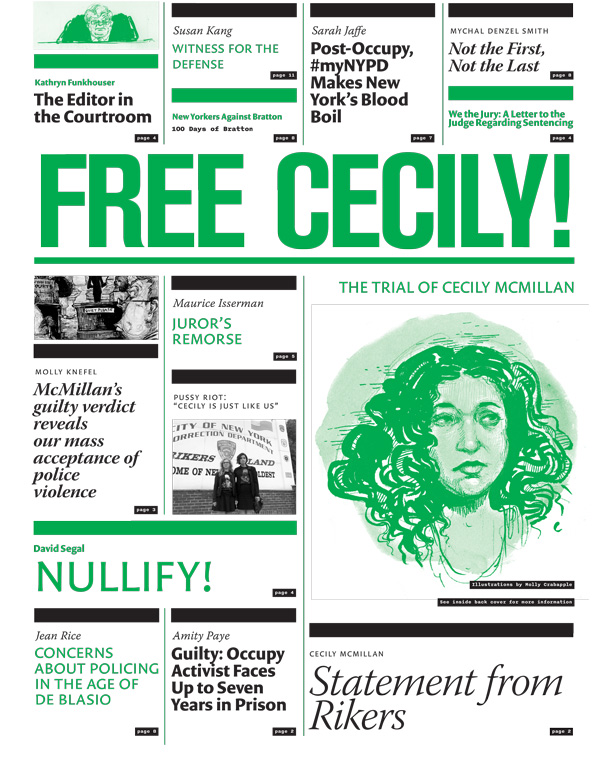 On Monday, May 5, Occupy Wall Street activist and friend of Dissent Cecily McMillan was unjustly convicted of assaulting a police officer at a demonstration celebrating the six-month anniversary of OWS. She is being held at Rikers Island until sentencing on Monday, May 19, and faces a maximum sentence of seven years in prison.

In response to this egregious verdict, members of the Justice for Cecily team have collaborated with fellow activists, writers, and editors—including Dissent contributing editor Sarah Leonard and members of the Dissent staff—to produce the Free Cecily! gazette. Prior to next week’s sentencing, the gazette aims to highlight Cecily’s case and the wider issues it raises about police brutality and repression of civil liberties, including the right to protest.Free Cecily! features contributions from Maurice Isserman, Sarah Jaffe, Molly Knefel, Natasha Lennard, Chase Madar, and Mychal Denzel Smith; illustrations by Molly Crabapple; Cecily’s statement from Rikers; and more.

To send a letter to Judge Zweibel asking for leniency in sentencing and learn about other ways you can support Cecily, visit justiceforcecily.com.

3 thoughts on “Justice for Cecily”