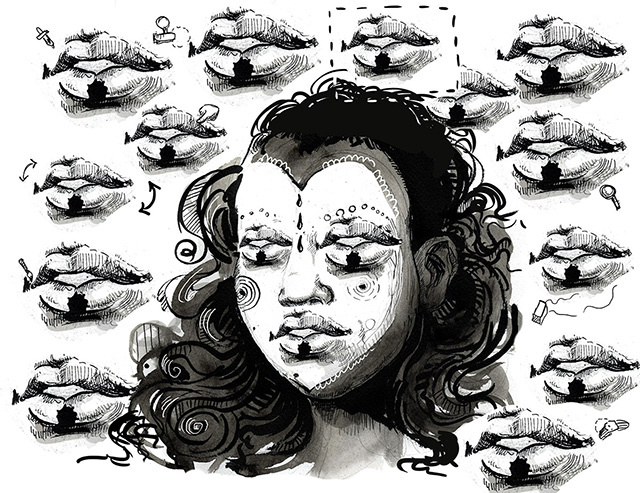 Without Photoshop, Gaga’s wig was more wig-like, her makeup flat beige, but she was the same skinny, strong-nosed chameleon that Stephani Germanotta has always been. The outtakes were not interesting but showing celebrities without Photoshop is Jezebel’s brand.

Jezebel exploded in popularity in 2007 by offering a $10,000 bounty for originals of Faith Hill’s Redbook cover. The raw photos proved the magazine had liquefied the star’s waist, softened her nasiolabial folds, and brutalized her elbow into a bendy tube. This January, with more controversy, Jezebel paid another $10,000 for the originals of Lena Dunham’sVogue cover shoot. Those revealed only a tidied dress.

Jezebel’s is a feminism that seeks its scapegoat in altered images. To refrain from Photoshop is girl-positive marketing gold. Dove Campaign for Real Beauty delights itself by putting out fake filters that chide retouchers. Magazines sign “No Photoshop” pledges. Clothing companies crow that they’ve never taken a clone-stamp to their models’ thighs.

To these feminists, Photoshop is to blame to unrealistic body standards, poor self-esteem, and anorexia in teenage girls. The campaign against Photoshop is the perfect cause for white, middle-class women whose primary problem is feeling their bodies do not match an increasingly surreal media ideal.

Photoshop, the belief goes, takes a true record of a moment, and turns it into an oppressive lie.